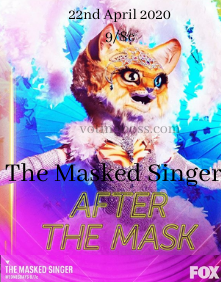 Anyway this season of the Mask is at the peak of success. The no. of viewers watching this season is double the previous 2 seasons. History has written itself by creating an After show which will telecast just after the release of fresh episode of the Masked Singer.

Makers decided to make the Masked series grow this season all because of its popularity. No doubt this year The Masked singer is one of the best show on television. And for sure it will leave its mark after finale.

What is After The Mask Show?

It is a Special after show which will have a special significance. It is necessary also in this time of COVID-19 to have light minded and entertainment sidewise.

Significance of the Show

The show is going to start from 22nd April 2020. It will telecast just after the unmasking of one masked singer on season 3 stage. Nick Cannon will host the after mask show but on virtual stage. Which will also include some celebrities as guest entries.

this after mask show will telecast for almost a month or we can say till the finale of The Masked singer. Get ready for another adventure on channel.