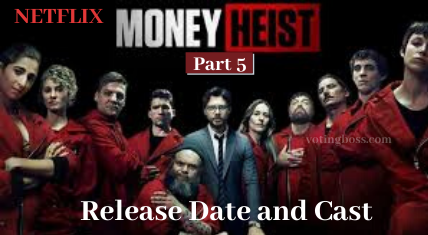 The Spanish crime drama show Money Heist just came back with its 4th season. Money Heist was relief for the viewers in this quarantine period. With all that hype of the show made more people to start watching this crime drama. 4 seasons have been released. Here comes the time for Season 5. Money Heist Season 5 Renewal is for sure. Because season 4 has ended with a suspense. To uncover further mysteries we have to wait for part 5.

Origninally the show was in spanish. All the actors are spanish actors. Orignal name of the show is La Casa De Papel. It has a very fine music. One of the famous ancient song Bella Ciao is its main track.

The show began with a man named as ‘Professor’ looking for people who could help him in the quest of making a hefty load of cash. To make his plans come true Professor together with his team-mates start working for the heist. Professor asks them to hide their identity from other fellow members and use a city name as their own.

Money Heist is amazing to watch. It is a perfect combination of crime, mystery and drama. You can read all the information about the 5th season, where to watch the show given below, you just need to scroll a bit down. 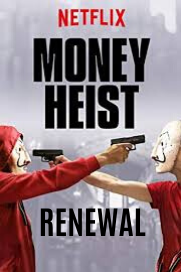 With the news of Rio being captured all the previous heist members are ready again with another heist to lure Rio to them. The heist began with a plan that Berlin has made a way earlier from the first heist. So they prepare for the plan that was made earlier and bring some new crew members.

The story of the show does not end in the 4th season. There were many scenarios like Professor was trying to save Nairobi while we could see Rio and Tokyo together were fighting a tank. The word from the viewers is that the show will continue with its 5th season.

So the news of the renewal is having a lot possibility which is making audience to think what might be in the next season of the Money Heist.

We have seen that at the end of the season the team of professor is happy as they have achieved what they wanted to do to some extent. But at the same time we saw the professor being caught by the Police Inspector Alicia. Let’s go through some fan made theories.

The production of the show began from early 2017, when the producers were meeting the authority of channel ‘Antena 3’ with the concept of the show.

The story was so good that the channel gave them a green signal for the show. Having millions of the viewers of the show from its initial episode made Netflix to acquire the show. Netflix together with Antena 3 is holding the broadcasting rights of the show.

From this point it is hard to say that when is the Money Heist Season 5 Renewal. However, we are quite sure that the 5th season is surely going to be available for the viewers in 2021. Hope, the show will notify us soon with the renewal news. 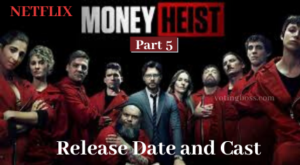 Since Season 1 there are so many people in the cast. But here we are going to mention some of the important cast who will be seen as Season 5 Cast in 2021.

These are going to be the main actors who you are going to see quite frequently in the 5th season of the show.

There are two ways for you to watch this show. First one is that you are having the services of channel Antena 3 at your homes. If not then you can ask your service provider to provide you their services.

If Antena 3 does not work in your region then the best way for you to enjoy the show is Netflix. As Netflix is one of the best online media service providers. You just need to buy the premium services of Netflix.

In Netflix, the show is available in both Spanish and English as audio option. So from our opinion it will be much better to choose Netflix where you get a lot of varieties of shows and movies which you can enjoy anytime.

Conclusion: Well, according to expectations the fourth season of this amazing series is also doing very well. All the seasons of Money Heist are phenomenal and now the makers have set the standard of the show very high. People are asking about Money Heist Season 5 Renewal. So let me tell you tha, for sure there will be the next season. It will be premiered in 2021. Cast will be same as season 4.

Will there be Part 5 of Money Heist?

Season 4 was finished on such a track that it is impossible to call it an ending. For the proper ending of the show, there must be another part explaining the events occurred in previous seasons. So yes, there will be a part 5.

When Will be Money Heist Season 5 Release?

How Many seasons Does money Heist Have?