Rayvon Owen is the host of the show. Before hosting this show Owen was an avid “simmer”. Rayvon has been playing this game since middle school.

The Sims Spark’d is the creation of Electronic Art (EA).  EA created this reality show in a partnership with Turner Sports and BuzzFeed. The first episode of the debut season in the US aired on 17 July 2020. However, the series was filmed in December 2019. In this article, we’re going to tell you How to watch the Sims Spark’d online. You can watch this show on television. And, you can stream the show online as well.

But before that let’s have a look at show’s information.

You May Also Like: Watch MAFS Matchmaking and Kickoff Online

The Sims spark’d is a reality show inspired by the video game The Sims. Moreover, the reality show of season 1 contains a total of 4 episodes. And, episode 1 of the show premiered on 17 July 2020 on the TBS network. The show features 12 contestants. Those contestants were selected through their gaming channel on YouTube and twitch.  All of them play the Sims video game their channel stream. 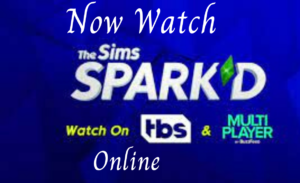 In the show, all constants are going to create their unique story in the game. And, these stories are based on their life experience, sexuality, and their limitless creativity. Their stories are going to be judged by the judges. Those Judges include YouTuber Kelsey Impicciche, singer and songwriter Tayla Parx, and EA Maxis developer Dave Miotke. The finalist of the show is going to win the prize money of $100,000.

How to Watch the Sims Spark’d Online

Watch The Sims Spark’d On TV

The Sims sparked premiered its very first episode on 17 July 2020. The reality show is based on the Sims, which a video game of EA. For creating this show EA has done a partnership with Turner Sports and BuzzFeed.  You can watch this show on television.  However, to watch on TV, one needs to have a cable connection. You can watch it on these two channels/ networks.

Those two TV channels/ Networks are:

Watch The Sims Spark’d on Phone

Some of the online platforms for watching the Sims Sparked are:

You May also Like: How To Watch Blindspot Season 5 Episodes

The cast of the Sims spark’d include 12 contestants, 3 judges, and a host. Those 12 contestants are avid gamers. And they stream their games on YouTube and Twitch.

The cast of those 12 contestants include:

The show also has 1 host and 3 judges, which are:

In conclusion, the Sims spark’d is a video game based reality show. Moreover, this is going to be season 1 of the series. You can watch this show on TV as well as on phone online. On cable, it is available on the TBS network or Multiplayer by Buzzfeed. And, to watch online you can stream it on Hulu or Sling TV.

How many episodes are going to air in Season 1?

Four episodes are going to air in Season1.

Where can I watch this show on TV?

You can watch it on the TBS network and Multiplayer by Buzzfeed.

Can this show be streamed online?

What is the prize money for the winner?

Which version of The Sims video game, the show is inspired from?